A friend once asked me for advice on how to live with dogs because their daughter was asthmatic. I suggested they consider switching to breeds like Labradoodles. His immediate question was, “Are Labradoodles hypoallergic?”

My response was this breed is allergy-friendly and that any allergy sufferer in the family would be okay with it. They acquired fleece-coated Labradoodles, and three years later, I haven’t heard any complaints.

If you have similar concerns, you’re in the right place. Keep reading to discover more about the Labradoodle, whether he sheds and how to live with this lovely friend even if you or a loved is allergic.

The Labradoodle is a crossbreed between the standard Poodle and a Labrador retriever. The name Labradoodle started in the 1950s but was made official in the 1970s by Wally Cochran in Australia.

The Labradoodle creation’s aim was mainly for people with pet allergies since the Labrador didn’t work well for them due to its heavy shedding.

Australia’s Royal Guide Dog association combined the Labrador with the cute Poodle rarely sheds in their effort to deliver a hypoallergenic breed.

The result was an allergy-friendly, intelligent, and playful hybrid. However, the allergy friendliness levels differ depending on the inherited genes, where the puppies can inherit more of the Labradoodle or Poodle.

Even with varying results, the Labradoodle still tops the list of the best dogs for people suffering from severe allergies or asthma.

By looking at their coat type, you can tell whether your dog is hypoallergenic. Labradoodles inherit the Poodle’s intelligence and are easy to train with their mild and lovely dispositions.

The most common colors of Labradoodles include milky white, caramel, apricot, black, beige, chocolate, copper, and shades of red, silver, and cream shades.

The allergy-friendly Labradoodles have three types of coats that include:

Labradoodles with wool coats are likely to inherit it from their Poodle parent. They are called curly Labradoodles.

Lots of grooming is required with these furry friends. I prefer brushing my curly friend daily to avoid excess hair build-up. The curls are tight enough with minimal shedding, making this dog ideal for people with pet allergies.

Regular grooming of this dog prevents the matting of his coat, and the best part is you can learn how to groom and cut your dog’s hair at home.

It’s the best coat for people suffering from allergies. Asthmatic people should settle for fleece-coated Labradoodles. It is the most common coat type.

Dogs with fleece coats are called “shaggy,” Their curls are tight and modest wave hence easy to maintain. It would help if you groomed your Labradoodle at least once a week for a neat coat.

You will rarely find a Labradoodle with a hairy coat, and if you do, the hair is straight like that of a pure Labrador retriever, but it’s scruffier.

It’s not easy to notice a hairy coat for a Labradoodle puppy until it’s 12 weeks old; that’s when the coat becomes apparent. Mostly furry pups result from first-generation breeding between a Labrador and a Poodle.

I wouldn’t recommend these pups for people with allergies due to their undesirable shedding, but if there is no one with allergies in your house, the dog makes a good family pet, and it’s cheaper.

Tips for Living With a Labradoodle

Even with the best hypoallergenic Labradoodle, you will experience minimal shedding, and the pet’s dander may lead to allergies. Observe the following steps to keep your house and pet dander-free.

Make grooming your Labradoodle a daily routine, and you won’t have to deal with allergies related to dust or hair that sticks on the pet’s coat. Grooming will minimize shedding too.

Include baths for thorough skin cleaning to remove dead cells. Remember to use an anti-allergen shampoo. Make it twice a week if you won’t brush your dog daily.

2. Get an Air Filter

Installing an air filter will help remove dander, dust, or dirt in the air, and even if your little one is shedding, you won’t have too much dander forming since the filter will have removed most of it.

We know that carpets hold a lot of dust, altering the air quality, and it’s worse when you have a shedding friend around. When the dander stick on your carpet, it’s hard to remove it. After bringing my Labradoodle home, I had to give out my carpet.

Instead, I switched to a hardwood floor, as it’s easy to clean and sweep, and doesn’t trap dirt.

It’s hard to prevent your little friend from jumping on the couch, and the best thing you can do is cover his favorite area with a blanket to prevent him from shedding on it. It would help if you had two blankets for exchange. Clean the blanket regularly to remove the dander.

5. Don’t Allow Him in Your Bedroom

The bedroom should be allergen-free since you spend your night there. Ensure that your furry friend doesn’t get in there, and if he does, he must be in his crate.

The hypoallergenic level also depends on the type of coat. Fleece-coated Labradoodles are the best with the lowest allergenic reactions, and the wool one is allergy-friendly with proper grooming.

The following generations of Labradoodles have different allergic reactions and shedding.

This first generation of Labradoodles comes from breeding the Labrador with a Poodle. The pups produced have two different coats depending on which parent gene dominates. The coat can be either flat with a wiry feel of fleece or a soft feel.

The offspring will have a healthy advantage when the parents don’t have health issues.

However, both coats have different shedding rates, plus they are not allergy-friendly. The best way to avoid them is by enquiring whether the Labradoodle you are about to acquire is an F1.

The second-generation Labradoodle is a crossbreed between the F1 Labradoodle and a Poodle. The aim of this was to increase allergy friendliness in the offspring.

There are higher chances that the offspring of this breeding will inherit the Poodle coat at 75% hence minimal shedding. It’s the best option for people with a severe pet allergy. These dogs develop a wool and fleece coat that need often brushing and grooming.

This generation has more of the Poodle characteristics. The offspring’s coat texture is admirable and high quality, with curly and wavy hair making it the best for people with pet allergies. But it’s not easy to find authentic third-generation Labradoodles.

Talk to your breeder about your preferred combination for better understanding.

Labradoodles are allergy-friendly, but it doesn’t mean they won’t shed and produce dander that can cause allergies. Their low-quality saliva allows people with allergies or asthma to get near them without fearing allergic attacks or hypersensitivity. However, their shedding ranges from minimal to none.

Are Labradoodles Easy to Train?

Yes. These intelligent friends will give you an easy time when training them. They exhibit the gentleness of a Labrador. With minimal shedding, grooming also becomes easier.

What Type of Labradoodle is Best for Allergies?

The coat of a Labradoodle determines the levels of shedding.  The hairy one isn’t an option for people sensitive to allergies. The fleece-coated Labradoodle is the best since it rarely sheds hair. However, you can settle for the woolly Labradoodle if grooming isn’t an issue.

Why Does My Labradoodle Shed Much?

Breeding a Labrador and a Poodle aims at bringing a non-shedding offspring. However, the results are unpredictable, and you may end up with a high-shedding Labradoodle. You can’t tell the type of fur your puppy has until it’s 12 weeks, so you might have picked the puppy thinking it’s a fleece-coated one, only to turn out to be the hairy type.

How Can I Tell If A Labradoodles Coat Will Be Curly?

Who Sheds More: Labradoodles or Goldendoodles?

If you’re looking for an allergy-friendly breed, you may want to consider a Labradoodle. With this dog, you don’t have to worry about your allergies. The intelligence of these dogs is unmatched, plus you will love their gentleness.

If you have a question or experience living with Labradoodles, please share it in the comments.

Remember, it’s hard to predict a crossbreed’s outcome, and you can get a high – or low-shedding Labradoodle. Your best bet would be a second-generation or third-generation Labradoodle.

Tammi grew up in the countryside on her parents’ farm where animals, including dogs, always surrounded her. Tammi Avallone is a lifelong dog-lover and the Managing Editor of FiveBarks.com. 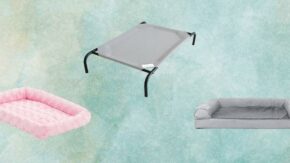 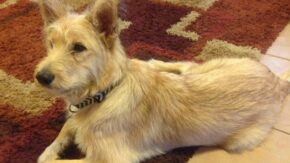 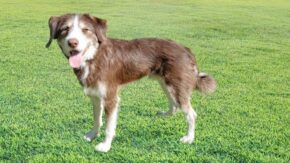