Many dog owners use crate training to keep their pets safely contained at home and in transit. A crate can also be beneficial when potty training your puppy and in the event of an emergency.

But is aggression caused by crate training?

Read this guide for helpful advice and tips on crate aggression, its likely causes, and how to deal with the problem.

Does Crate Training Cause Aggression?

No! Crate training doesn’t cause aggression in dogs, provided that it’s used correctly.

That said, there are a few mistakes that some dog owners make while crate training that can lead to aggressive behavior in their pets.

How Can Crate Training Cause Aggression In Dogs?

Most dogs take happily to being crate-trained. So, what can go so wrong that your dog’s crate becomes an environment for aggression?

One of the biggest dog training mistakes and a primary reason for aggression in crated dogs is simply that inexperienced dog owners lock their pet in his crate for too long.

Dogs are highly social animals, and isolating your dog in a locked crate for hours on end is a sure-fire way of causing frustration, which can often manifest as aggression. A lonely, confined dog is far more likely to become aggressive than one that’s well-socialized and has plenty of company.

Ideally, your dog should not spend more than six to eight hours in his crate without a potty break or some form of social interaction.

Never use your dog’s crate in anger as a time-out or punishment tool. Your dog’s crate should be his safe place, where he can seek refuge in stressful times or when he wants a bit of peace from the hustle and bustle of a busy home.

If your dog associates his crate with your displeasure and learns to see being crated as a punishment, he will quickly resent the crate and could become aggressive when you try to crate him.

Another common mistake that’s made by lots of people is to use their dog’s crate for other dogs or pets, as that can sometimes trigger aggression.

Dogs are naturally territorial creatures, and most regard their crate as their personal space. So, if you invade that space by using it for another pet, you might cause aggressive behavior in your canine companion.

Dogs need enough daily exercise to keep them mentally and physically happy and healthy. Crating energetic breeds, such as Goldendoodles, German Shepherds, and Border Collies, without providing them with enough exercise can cause aggression.

When your dog is confined to his crate, he’s unable to escape a situation that he finds stressful. So, if you have young kids in your household, be very careful that your poor dog doesn’t become the victim of teasing and torment while your pet is shut in his crate.

That can very easily trigger aggressive behavior in your dog, potentially resulting in bitten fingers for your kids and long-lasting behavioral problems for your dog.

Why Are Some Dogs Aggressive?

Although many dogs are incredibly tolerant and laid back, some tend to be aggressive.

So, why is that? And is it safe to crate an aggressive dog?

Strange as it sounds, a major cause of aggressive dog behavior is simply that their owners don’t understand the dog.

All dog breeds are different and were originally bred to do a specific job. So, it’s important that you understand what’s expected from your dog, as that can heavily influence his personality and levels of aggression.

For example, a herding breed is a highly intelligent working dog that needs lots of mental stimulation and physical exercise. A herding dog that’s bored and spends too long shut in a crate can quickly become snappy and irritable.

Although your pet dog is a much-loved family member, he’s also an animal that has very specific needs, depending on its breed.

Some dogs need lots of one-to-one attention and suffer greatly from separation anxiety when kept apart from their human family. Other pups are happy as long as they get plenty of outdoor exercise and interaction with other canines down at the dog park. It’s really just a case of understanding your dog’s individual needs.

Separation anxiety is a serious condition that affects some breeds. If you don’t address the condition and treat it appropriately, the dog will become more and more frustrated, especially if he’s left alone in his crate for long periods of time. That can quickly lead to aggression.

Dogs are extremely sensitive animals that form a deep and lasting bond with their owners. That means that your dog will pick up on your mood. So, if you feel sad and upset, your furry friend will show empathy. Similarly, if you’re aggressive and angry, your pet will most likely pick up on that, too.

So, you must try to temper your moods when you’re around your dog, remaining calm and not becoming an aggressive person yourself.

Dogs are naturally packed animals, living in groups with a clearly defined hierarchy. There is usually one Alpha dog, often a female, that’s in charge of the pack. The other pack members are subservient to the Alpha, following his or her lead.

As far as your dog is concerned, you and your family are your pet’s pack. Many owners spoil their pets, allowing the dog to rule the roost and do as he pleases around the house.

For example, you might allow your dog to sleep in your bed or shove you off the sofa because your pushy pet wants it for himself. Before you know it, your dog has assumed the Alpha role! So, if you try to shut your dog in his crate, there’s a good chance he’ll become resentful and aggressive.

Ideally, every dog should be well-socialized from puppyhood. If your puppy gets used to behaving properly around strangers, other dogs, and other pets, he should grow up to be well-behaved and well-adjusted.

A dog that’s not been properly socialized and given the interactions that he needs is more likely to display anti-social behavior, especially when shut in a crate and isolated.

How To Deal With Crate-Related Aggression

There are a few things you can do to deal with crate-related bad behavior and aggression in dogs.

First of all, your dog must regard his crate as a stress-free environment and a comfy space where he wants to spend his time.

Many dogs will happily go into their crates to chill out and sleep, even when the door is left open!

Dogs are creatures of routine. So, if you only crate your dog occasionally when it suits you, that’s not fair to your pet. You need to allow your dog time to get used to spending time in his crate. Ideally, dogs should be properly crate trained from puppyhood. Putting a five-year-old dog that’s never been crated before into a cage for five hours is asking for trouble!

Should You Crate Train An Aggressive Dog?

So, what do you do if your dog has aggressive tendencies? Is it a good idea to crate train your feisty furry friend?

The first thing to understand is that your dog’s crate is a management tool, not an automatic problem solver. In other words, a crate won’t prevent your dog from being aggressive, although using one might help you to deal with a difficult situation more effectively and safely.

There are several different sorts of crate aggression, and the success and appropriateness of using crate training as a management tool for an aggressive dog depend on the type of aggression your dog displays. It’s basically a case of horses for courses, as the saying goes.

For example, if your dog is only aggressive toward small children in your household, it’s not such a good idea to shut him in a heavy-duty, escape-proof crate and hope for the best. That problem is potentially very dangerous, and we would always recommend that you seek the advice of a professional dog trainer and behaviorist. In extreme cases, it might be better to consider re-homing the dog.

However, if the dog is only aggressive toward your cat, you might find that using a crate helps to manage the pair’s interactions by keeping the two warring parties separated.

I hope you found this article on crate training and aggression in dogs helpful. Don’t forget to share if you enjoyed it!

If a dog is crate trained correctly, he should regard his crate as a safe, secure, comfortable space where he wants to spend his time. Ideally, every dog should be properly socialized and crate trained from puppyhood, although it is possible to teach an older dog to use his crate.

Did your dog get aggressive in his crate? How did you solve the problem? Share with us in the comments box below. 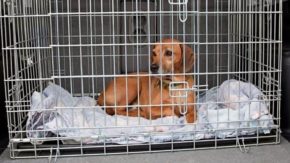 Need a dog kennel for your hunting dog? From portable, insulated dog boxes to home enclosures for your backyard, check out these 15 suggestions for some ideas! 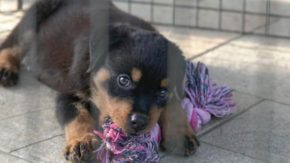 Spending time in a crate can be stressful for puppies, but toys can make crate time fun. Read this guide to discover the 19 best crate toys for puppies.

If you’re looking for a dog crate that looks great and seamlessly fits with your home decor scheme, read this review of the beautiful Fable dog crate. 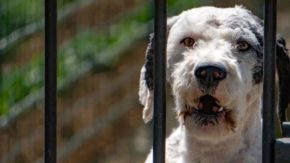 Does your dog bark when he’s in his crate? Then you need this guide! Keep reading to find out the right way to get your dog to stop barking in his crate.