Many dog owners choose to crate-train their dogs. But even if you take a sympathetic, positive reinforcement approach to training your dog, problems can still arise.

So, what can you do if crate training is not working for you and your pet? Crate training aversion and crate training regression are not uncommon phenomena in puppies and older dogs. But we have your back!

Read this guide to learn how to fix the most common crate training problems you and your pooch are likely to encounter.

Some people regard crate training as a cruel thing that restricts a dog’s freedom.

That said, if you try to rush the process and make mistakes early on in your puppy’s training, you risk setting everything back considerably.

In extreme cases of crate abuse, crate aggression can result, and it becomes impossible to crate train a dog successfully. In that case, alternative confinement options, such as puppy pens or isolation rooms, can offer a solution.

Crate advocates find many benefits in crate training their dogs, including:

A crate should be used for these reasons only. Your dog’s crate must never be used as a punishment for your pet. In addition, do not leave your dog shut in his crate for very long periods of time without sufficient bathroom breaks.

When To Start Crate Training

Crate training should begin from the moment you bring your new puppy home. Before you go to collect your new furry family member, the crate should be set up and properly equipped so that the little guy has somewhere he wants to go.

If you take the time to acclimate your puppy or adult rescue dog to their new crate patiently and thoughtfully, there’s no reason that the crate shouldn’t be a place your pet wants to go.

Common Mistakes That Can Make A Crate “Aversive”

There are various forms of abuse of crates that can make a dog aversive to his crate for life, including:

All the above are common errors that dog owners make, which are very easily avoided.

If your dog or puppy becomes resentful or resistant to being confined to his crate, various problems will arise, some of which can take a long time to overcome.

Your dog can’t tell you if you’re getting it wrong, acting out their angst in various ways instead.

Typical crate aversion behaviors can include:

Some shy, nervous dogs don’t act out. Instead, they internalize their frustrations by licking the inside of the crate or themselves or self-harming. The dog might constantly turn around inside the crate or defecate and eat his own feces.

All these problems are caused because the dog was not properly acclimated to his crate or crate abuse occurred, making the puppy or dog averse to the crate.

As is the case with most dog training issues, prevention is much better than cure.

Here are a few tips for fixing crate training problems:

Your puppy won’t want to spend time in his crate if the environment is not comfortable and cozy.

So, take the time to turn the crate into a comfortable, snug place for your pet. You can do that by adding a padded bed for your pup to snuggle down into, as well as placing bumpers around the sides of the crate for the dog to lean on.

It can help to cover the crate with a proper commercially made crate cover, which helps to create that dark, den-like experience dogs love.

The crate must be large enough for the dog to stand up, lie flat out, sit up, and turn around without colliding with the crate’s sides or roof.

Be sure to take your dog outside for a bathroom break immediately before you put him into his crate for sleeping or if you’re going out. Never confine your dog for so long that he can’t hold it.

Feeding In The Crate

You can encourage your puppy to love his crate by feeding him in it.

Start by putting the food bowl close to the open crate door. Once your puppy is confidently eating from the bowl, try moving the food further back into the crate.

Your puppy will begin to associate the crate with nice things, such as food, and going into the crate will quickly become an enjoyable thing for your pet.

Hiding high-value treats under the bedding in the crate and enriching the interior with your dog’s favorite chew toys can help to resolve crate issues.

By now, your puppy should be associating the crate with nice things and will overcome his fear and aversion to spending time inside it.

Now, you can begin to expect your dog to spend short periods of five minutes or so confined to the crate. The best time to do that is immediately after a walk or energetic play when your puppy is ready to rest.

Stay close to the crate and reassure your pup so that he doesn’t feel alone and isolated.

Gradually increase the confinement periods to 15 minutes, remaining with your puppy.

At all other times, leave the crate door open, and be sure to make the crate comfy and enriched, as described above. Your puppy should be free to come and go as he pleases and use his crate for rest when he wants to nap.

A more unusual form of crate training regression that’s encountered by some pet parents is that their puppy or adult dog becomes very overprotective of the crate.

Although it’s not one of the more common mistakes of crate training, overprotection often occurs if the dog owner has done a poor job of setting limits and establishing leadership.

An overprotective dog will effectively defend his territory, becoming aggressive when the owner tries to remove the dog from the crate or even just approaches it. The problem can often be solved by denying the dog access to the crate for a while or simply changing the crate’s location in the home.

In this part of our guide, we answer some of the most frequently asked questions of dog owners about crate training.

Q: Are some dogs impossible to crate train?

A: In some cases, it can be almost impossible to crate-train a dog. Crate training can be extremely challenging if you have a dog that already has negative associations with being crated. Often, a dog that’s been traumatized by being left alone and confined to a small room, a crate, or a kennel will never be happy in a crate, even if the door is left open.

These dogs often suffer from separation anxiety and other stress-related conditions that have become associated with confinement. Dogs rescued from puppy mills and from former homes where they have suffered from crate abuse often fall into the category of pups that are impossible to crate train.

In those cases, alternative methods of confinement are often successful, such as puppy pens or using a baby gate to keep the dog away from certain areas in your home.

Q: Why is my dog getting worse at crate training?

A: There are several reasons for crate training regression:

Take your time when crate training your dog or puppy, and always be prepared to take a few steps back if things go wrong.

Q: How do you get rid of crate anxiety?

A: If your dog becomes upset and anxious when confined to his crate, you have several options:

If possible, take your dog with you whenever you can to reduce the amount of time he spends alone at home in his crate.

Q: What to do if your puppy freaks out in the crate?

A: Puppies often freak out in their crate because they are lonely. After all, you became their surrogate parent when the pup was taken away from his siblings and mom.

The simple fix is to keep the crate near to you when you’re around at home. At night, put the crate close to your bed so that the puppy knows you’re still there.

For example, as an alternative to nighttime crating, you could try using a puppy pen in your bedroom. However, if you’re using a crate for housetraining your puppy, that approach might make matters worse.

Q: How do you crate train a dog who hates the crate?

A: Dogs usually develop crate aversion because the crate training process was too hurried. So, the best thing to do is go back to the beginning and start over.

Initially, remove the door from the crate or hold it open with a bungee cord. Feed your dog in the crate, and add plenty of your pet’s favorite treats and toys to the crate. Make sure you equip the crate with a comfy bed and place the crate in a spot where your dog can see you and your family.

Allow the dog the freedom to come and go from the crate as he pleases, only closing the door for very short periods when your pet is comfortable, confident, and shows no signs of anxiety.

Did you enjoy our guide on what to do if crate training is not working for you and your canine companion? If you did, please take a moment to share the article!

Crate training can be very beneficial to dogs and their owners. Dogs generally appreciate the cozy feeling of a den-like space that a crate provides. A wire crate can be a useful tool when potty training a puppy or adult rescue dog. And a closed crate can help treat dogs with separation anxiety.

Did our tips help to solve your crate training blues? Tell us in the comments box below. 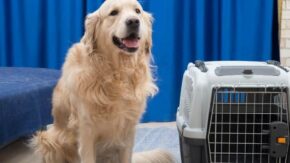 Crate training helps your pup adjust to their new household, maintain good behavior, sleep better, and develop a routine. We’ll tell you everything you need to know about crate training in an apartment. 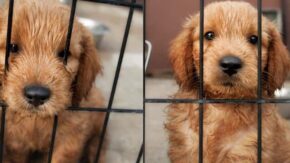 Have a new Goldendoodle pup? Conflicted about crate training? This article discusses why you should crate train your pooch & some great tips to simplify the process! 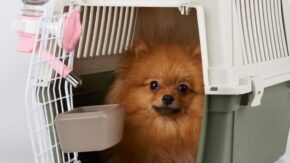 If you’re short on time or just want to get the basics down, crate training your dog in a weekend is definitely doable. Here’s how. 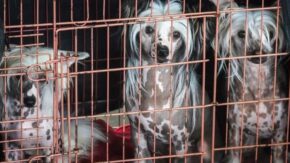 Many dog owners choose to crate-train their pets. But is it right to confine your dog to a crate? Is crate training cruel? Read this article to find out!