This guide will provide you with all the information and techniques you need to start breeding Labradoodles, including tips on selecting the right parents, health concerns to watch for, and more!

The labradoodle is a relatively new breed, having only been around since the 1980s by Wally Conron. He originally bred the labradoodle in Australia as a guide dog for allergy sufferers after receiving a special request from a blind woman in Hawaii whose husband had allergy symptoms around dogs.

It wasn’t easy initially and took nearly 33 tries before the labradoodle was made. He started with a poodle as the basis for the request, but when he couldn’t find a suitable one, he crossed a poodle with a Labrador.

After much trial and error with the woman and her husband, they finally found one that fit their needs after he sent multiple samples to them. Since then, Labradoodles have become popular designer pets worldwide thanks to their intelligence, friendly temperament, and low-shedding coats.

How To Breed Labradoodles

Once you’ve decided the size of Labradoodle you’d like to breed, it’s time to find the right parents. When choosing parents, it’s important to consider health, temperament, and conformation (physical appearance). You’ll also want to make sure that both parents are of similar size so that the puppies will be a consistent size.

When breeding Labradoodles, selecting a healthy and genetically sound female dog is important. The ideal female labradoodle to breed should have a good temperament, be physically healthy, and have a low-shedding coat.

When selecting a female labradoodle to breed, it is important to consider her age. A female labradoodle should be at least two years old before being bred. This will ensure that she is physically and mentally mature enough to handle the rigors of pregnancy and motherhood to produce healthy puppies.

It is also important to ensure that the female labradoodle has been health tested before breeding. This will help ensure that the puppies she produces are healthy and free of any congenital diseases.

Breeders should take care not to breed a female too often, which can lead to damage that will end their breeding career. As your female ages, you’ll need to be mindful of her ability to birth pups and how she handles it. The older they get, the rougher time they can have, so it’s important to retire them from breeding or risk miscarriage and stillborn pups.

Another thing in older mothers is the lack of milk that can be produced, so it’s recommended that Labradoodle females stop being bred once they reach eight years old to ensure you always get healthy puppies. The typical litter size is about 4-10 puppies.

When selecting a male labradoodle to breed, it is important to consider his age. A male labradoodle should be at least two years old before being bred. This will ensure that he is of proper size, age, sexually mature, and known temperament to breed a stable, happy, healthy litter.

When breeding Labradoodles, you should know a few health concerns to prevent future health hazards. Labradoodles are susceptible to hip and elbow dysplasia and eye problems such as progressive retinal atrophy and recurrent diseases that can happen in any genetic line.

Genetic disease is a real issue with cross breeding and, if not done properly, can lead to less than desired health effects. Make sure you’re getting your dogs tested and have health certificates for any potential families in the future. For some of them, this may be their first-ever labradoodle, and you’ll want it to be a pleasant experience.

The following can be common health issues when breeding:

Not performing health testing to get health certificates for your dogs can cause genetic disease in the line and recurrent diseases.

Congenital eye disease is a condition that is present at birth and affects the eyes. It can cause various problems, such as blindness, cataracts, and retinal detachment. It is important to have both parents OFA certified before breeding to reduce the risk of these genetic traits being passed on to the puppies.

Unfortunately, Addison’s disease is common in both standard Poodles and Labradors and has been passed down to Labradoodles. This condition affects all generations of Labradoodles, making it a serious health issue to be aware of. Addison’s disease occurs when the adrenal glands do not produce enough hormones.

Symptoms of Addison’s can include:

Joint dysplasia is a condition that affects the joints and can cause pain, lameness, and arthritis. A malformation of the bones causes it in the joints and is a genetic disorder. It is important to have both parents OFA certified before breeding to reduce the risk of these disorders being passed on to the puppies.

Symptoms of joint dysplasia can include:

If you think your dog may have joint dysplasia, talk to your veterinarian as soon as possible. Joint dysplasia can be painful and debilitating, but there are treatments available that can help your dog live a happy and healthy life.

As you can see, there are a few health concerns to be aware of when breeding Labradoodles. However, with responsible breeding practices and early diagnosis and treatment of any health problems, Labradoodles can lead happy and healthy lives.

If you’re thinking about breeding Labradoodles, there are a few things you should keep in mind. Foremost, it is important to only breed Labradoodles with other Labradoodles; cross-breeding with other breeds can lead to health problems down the line. Second, both parents should be health-tested and free of any genetic disorders before breeding.

Finally, you’ll need to have a good understanding of labradoodle temperament in order to match up with compatible parents. You should also always visit the dogs in person so that you can see what condition they’re in and where they live.

While Labradors and Poodles have minimal issues with birthing, that doesn’t mean it will pass on to the Labradoodles they produce. However, because the parents are typically easy to breed and birth puppies with, it will make it highly likely any pups they have will have easier births, too.

The issues that can crop up with birthing are the genetic defects that could happen, and to prevent this, make sure you have the parents tested before breeding. A good way to do this if the dogs aren’t yours is to get the health certificates of both parents to see what their OFA and other scores are in terms of health.

When you’re looking to breed any dogs, you’ll want to get them health tested so you can avoid any genetic issues that might crop up. If you’re a responsible breeder, perform these tests to make sure you’re getting the healthiest pups possible for your future families.

A lot of congenital defects you might see in Labradoodles are common health issues when not doing your due diligence and research to get the healthiest puppies possible.

Tests you’ll want to get will include:

Each of these can cost varying amounts depending on where you live; however, in the long run, it’s worth it to ensure your pups are as free of genetic faults as possible. It’s true that a dog with these tests will be a little more expensive up front, but considering they will be as healthy as possible, it will save you time, money, and heartache in the future.

Labradoodles can vary widely in appearance, depending on their parentage. However, all Labradoodles share a few key characteristics, including a medium-sized build, a rectangular head, and a coat that can be either curly or wavy. Labradoodles can come in any color or markings. They also share a lovely temperament and personality traits that make them an extremely desirable breed.

Labradoodles can range in size from 14 to 24 inches tall at the shoulder and 40 to 65 pounds. Knowing what your dog’s potential size will be is helpful if you’re living in a small home or apartment. If you live in a smaller home or apartment, the mini-doodle would likely be your best choice. This specification goes across the entire breed, so you can use this guideline to best pick a pup.

Labradoodles have a medium-sized, rectangular body with a strong, muscular build. Their chests are deep, and their backs are level. Labradoodles have well-sprung ribs and a moderate tuck-up. Their legs are slightly longer, and their shoulders should have good angulation while also having firm elbows.

One of the most remarkable traits is the adult coat in Labradoodles. A coated Labradoodle should have either a curly coat or wavy coat and come in various color combinations. The beautiful coat is dense and may be short or long. Labradoodles shed little, and their coats are considered good for allergy sufferers. Reputable breeders won’t breed for colors but for genetic diversity and health.

There are several colors of coat, including:

The coat should be at least 4-6 inches long, and while the curls don’t need to be tight, they shouldn’t be fluffy either while being low-shedding. This desirable trait in Labradoodles is what draws most people to them.

The labradoodle has a rounded skull with a moderate square stop. Their muzzle is of medium length and should be square, too, with a long fleshy nose. A responsible breeder should take these into account when breeding dogs, though these genetic traits aren’t as important as the health of the dog.

Labradoodles have medium-sized, almond-shaped eyes that are extremely expressive. They have hazel, honey color, or dark brown eyes. Their ears are set high on their head and are of medium size and lie flat against the skull, and should be thick in the ear flap. Their ears shouldn’t, however, go below the lower jaw in size. Labradoodles also possess a scissor bite, so you’ll need to check their teeth to look for this trait.

Labradoodles are intelligent, friendly, and outgoing dogs, which makes this a desirable trait and one of their remarkable traits. They are good with children and other pets and make excellent family dogs and have fun energy for those that have kids.

Labradoodles are also very trainable and make great working dogs as they have plenty of energy. They’re able to sense their owners’ moods pretty well, so if you’re not feeling up for being sociable or playing, they will probably entertain themselves.

Breeding Labradoodles can be a great experience, but it’s important to remember that there are health concerns you should know before getting started to avoid any devastating defect in the genetic line.

By getting your dog’s health tested and selecting parents with the right characteristics, you can minimize the chances of genetic problems cropping up in your puppies. Labradoodles come in many shapes, sizes, and colors, so you will find one that’s perfect for your family.

Labradoodles are loving, intelligent dogs that make a great family companion for the ideal family. With a little research and visiting dogs in person, you can find the perfect labradoodle pup to join your home or parents you can responsibly breed together as a reputable breeder. If you have questions, please let us know in the comments below! 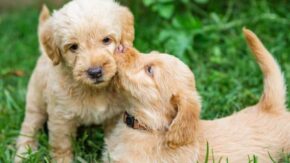 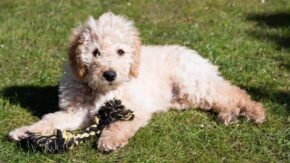 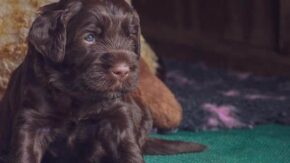