Do you know the difference between a Bernedoodle and a Labradoodle? If not, don’t worry—you’re not alone. Many people are unsure of the differences between these two mixed-breed dogs.

This article will compare and contrast the Bernedoodle vs. Labradoodle in terms of their origins, size, appearance, temperament, lifespan, health, grooming needs, and training. We will also give a conclusion on which breed might be better for you.

When comparing two breeds, it’s essential to look at the genetics of the puppy or dog you’ll be getting. You’ll want to ensure the parents are just as healthy as your pup by asking about testing and certificates for certain defects and diseases. Evidence of health testing will tell you how much effort and care is placed into the dog you’re getting.

Reputable breeders will test for things such as elbows, hips, eyes,, and other conditions that may affect the breed. They should openly share these results with you and show you the lineage of the pup or dog you’re picking up.

So, what does this mean for you? Let’s learn more about the two breeds themselves before drawing any conclusions.

Origins of the Bernedoodle vs. Labradoodle

Bernedoodles can be spotted by their unique coats in a tri-color coat and two-color coats. There are, however, many variations of coat types in brown, white, and black colors. Labradoodles tend to have a solid coat color ranging from honey to black.

Energy-wise, the Labradoodle seems to have more energy than the Bernedoodle mainly because the parentage makes a big difference. Bernedoodle is quite laid back compared to their counterpart, the Labradoodle, which is no surprise considering the Labrador Retriever is a fairly energetic dog and is one of the common traits they inherit.

It’s often difficult to predict in some generations the exact size your dog will be. Depending on the generation cross, they could be different sizes even within the litter itself.

Your generation of puppies will usually tell you what size they may be, but there are always exceptions to the rule. For those breeders out there breeding for future generation litters, consistency is key to ensuring they’re similar in size, temperament, and appearance.

The Bernedoodle can range in size from the toy (under 20lbs), miniature (15-25 pounds), medium (30-45 pounds) to standard (over 40-75 pounds). They have a coat that can be either wavy or curly and is usually a tri-color coat consisting of black, brown, or white.

The Labradoodle can also range in size from the toy (under 20lbs), miniature (20-30 pounds), medium (35-50 pounds) to standard (over 50 pounds). They usually have wavy coats, curly coats, and straight coat types and can be black, brown, white, cream, or apricot in color.

Both the Bernedoodle and Labradoodle are loving and loyal hybrid breeds while also being intelligent breeds with a blend of traits from their parents. They are great family dogs with children and other animals, making family dynamics a breeze.

Both breeds will need regular exercise, as they both can take on various jobs, have varying energy levels from dog to dog, and can easily keep up with any family lifestyle. Check on the energy levels of the parents to see what you may get in terms of activity. Though this isn’t always a good rule of thumb, you can be assured there will be some traits your pup has from its parents.

Life Expectancy of the Bernedoodle vs. Labradoodle

The Bernedoodle and Labradoodle share the same lifespan because both breeds are hybrids. Hybrids are crossed between two purebred dogs, and as a result, they are healthier than either of their purebred parents. This is because they breed hybrids for the good qualities their parents have. Here, the hybrid dogs inherit the best qualities of both the Bernese Mountain Dog and the Poodle.

The Labradoodle has the same lifespan as the Bernedoodle, as a typical Labrador Retriever also lives between 12 to 18 years. Labrador Retrievers tend to live for 12-14 years on average, depending on how they’re taken care of and their genetics.

The Bernedoodle has moderate grooming needs. They will need to be brushed weekly, and their coat should be trimmed every six to eight weeks. For those dogs with skin allergies and skin conditions, there may be the need for special shampoos or medications to help keep them healthy.

The Labradoodle has moderate grooming needs, much like their cousin, the Goldendoodle. They will need to be brushed weekly, and their coat should be trimmed every six to eight weeks.

If you have issues with trimming your dogs’ nails, ask your vet or groomer if they can trim them for you. They will also need to be bathed as necessary to avoid a smelly coat or any skin conditions that may crop up because of poor hygiene.

Both breeds have similar needs for grooming, especially those with curly coats. It’s important to groom your pup or dog regularly to gain the following benefits and keep up with health checks:

Brushing your dog’s coat regularly is the best way to keep it healthy and free of mats. It would be best if you brushed your dog’s coat at least once a week, using a brush that is appropriate for their coat type.

Brushes appropriate for the different coat types can be as follows:

It would help if you also trimmed or Dremel your dog’s nails every six to eight weeks. This will help prevent dirt and bacteria from building up under their nails. In addition, bathe your dog as needed. This will help keep them clean, well groomed, and healthy.

It is very important to train your dog starting from puppyhood. This will help ensure that they develop good behaviors and are well-behaved.

One of the effective training techniques to train your dog is positive reinforcement. This means rewarding your dog for good behaviors such as following commands, staying calm, and not jumping up on people.

It is also important to socialize with your dog at an early age. This means exposing them to different people, places, and situations so that they can learn how to behave around others.

Obedience training is another important aspect of training your dog. This involves teaching them basic commands, such as sit, stay, come, and down. Training is an important part of taking care of your pup, doing this will give you a more stable and well-behaved dog in many situations.

Overall, the Bernedoodle and Labradoodle are intelligent breeds eager to please and relatively easy to train. However, socializing is still important, and obedience trains them early to prevent any behavioral issues from developing.

With owning a dog, it’s important to be aware of the responsibilities and potential financial hardships that come with it. Dogs require a lot of care and attention and can be quite costly to maintain.

The average cost to groom a dog is between $50 and $75. This includes bathing, brushing, and trimming their nails. It’s important to groom your dog regularly in order to keep them clean and healthy. Grooming can be done at home, but if you want to have them professionally clipped, be prepared for monthly costs.

While they may not be the most expensive breeds to own, it’s still important to be prepared for the financial responsibility that comes with dog ownership. In the first year alone, you can spend up to $1500 getting your dog set up. The cost of a crate, toys, medical expenses, and other factors can come into play in that first year of ownership.

While we’re mostly talking about whether your Labradoodle or Bernedoodle’s health is the best, you also want to look at their parentage and common health issues. Poodles are the number one dog used for creating these two breeds, so it’s only logical to assume they will inherit a lot of poodle traits, genetics, and health issues.

Poodles are usually pretty healthy, however, some common illnesses affect the breed. Some of which you may want to make sure they have tested the parents for. Some of these include:

As with the two previous breeds, it’s best to have parents checked before breeding them. Most breeders will do this, but asking for test results and certificates doesn’t hurt. Here are some of the more common issues that Bernese Mountain Dogs have.

The Labradoodle is also a relatively healthy breed, with an average lifespan of 12 to 18 years. For these dogs, you’ll want to make sure you have a good healthy set of parents. Despite Labradoodles gaining better traits than the Poodle and Labrador, they also have some common health concerns.

The Bernedoodle and Labradoodle are magnificent dogs for families and those with allergy symptoms. They are intelligent, loving, and loyal. They have moderate grooming needs and require moderate maintenance. Both breeds also have an average lifespan of 12 to 18 years.

So, which dog is right for you?

Usually, if one breeder doesn’t have what you want, you can see if there are other breeders out there with one. It’s bad form, however, to get on the list of one breeder and go to another. Going from breeder to breeder with the intent of finding one that will immediately have a dog for you might not be possible, and you should be prepared for that.

Both breeds make great family pets and are sure to bring you years of happiness. Thanks for reading, and we hope this helped you decide which breed is right for you!

Do you have questions or comments? We would love to hear from you in the comment section below! 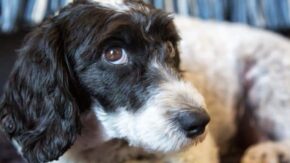 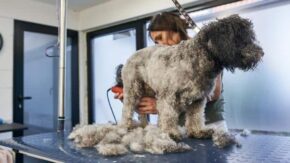 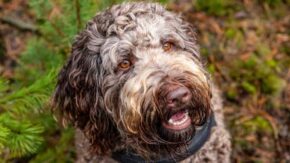 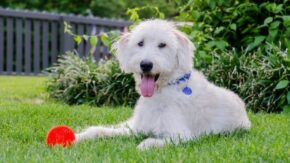