As a pet owner, you want to keep your four-legged family members safe from harm. And while the possibility of a fox attacking your dog may seem like something out of a fairytale, it can happen in real life. Let’s take a look at what you need to know about foxes and your pup.

The Foxy Facts About Keeping Your Pooch Safe

What Is the Likelihood of a Fox Attacking a Dog on a Leash?

In the likelihood of your dog being attacked by a fox, it’s important to consider both their natural behavior and the current environment when faced with a severe threat. Foxes are not known for attacking dogs—even those that roam off-leash or are on retractable leashes.

That said, there are certain situations where an attack may occur. If a fox feels threatened or cornered, for example, it may lash out defensively.

If you live in an area where there is a large population of urban foxes (that is, those that live in proximity to humans), then this risk increases slightly because of their familiarity with people and pets in the area.

In most cases, if you encounter a wild animal such as a fox during your walk, it will probably just observe you from far away or even run away from you before you can get too close.

The best way to prevent an attack is to keep your pup away from potential fox dens or areas inhabited by wild animals. It also helps if you monitor your dog at all times during walks, especially when they’re off-leash!

I always recommend if you’re going to let your dog off leash and they’re a sighthound or any other kind of prey-driven breed, only do it in a fenced-in area.

If you spot any signs nearby, consider bringing them back on a leash until the coast is clear. Make sure their vaccinations and tags are up-to-date in case contact with any wild animals occurs.

That being said, certain situations may make your pup more vulnerable to attack and may cause minor issues such as not wanting to poop on a leash or walk.

For example, smaller pups may appear more vulnerable in the eyes of predators such as foxes, so we should take extra precautions when walking these breeds.

Don’t ever leave your small dog(s) outside alone without supervision. Large birds of prey will see them as an easy catch. I’ve found if you feel you have to put them outside without your supervision, take precautions such as putting them in a run with a tarp cover to prevent birds of prey incidents.

What to Do if Your Dog Is Attacked by a Fox

If your pup gets into an altercation with a fox, immediately call animal control or contact wildlife authorities who can assess the situation and act accordingly if necessary.

In most cases, though (especially if you keep them leashed), it’s unlikely that anything serious will come from such an encounter. Just remain calm and remove yourself from harm’s way until help arrives!

Fox Behavior & Why They May Attack Dogs

It isn’t common for foxes to attack dogs, but there are certain situations where they may feel threatened enough to act out aggressively, such as when protecting their young or territory from perceived danger (like an approaching dog).

While foxes are typically shy animals that avoid contact with humans and their pets, it is still important to take precautions to keep both yourself and your pup safe.

Paying attention to their behavior, keeping them on leash, and avoiding wildlife areas are all wonderful steps for prevention and protection against potential attacks!

Foxes can display aggressive behaviors when they feel threatened or territorial. Some common signs of aggression in foxes include but are not limited to:

Other risk factors are that foxes may also take a defensive stance with their tail raised and ears flattened against the head. If you see these behaviors, it’s important to back away slowly and give the fox plenty of space.

I’ve seen foxes get aggressive, usually when they’re threatened or they’re sick. It’s not uncommon, unfortunately, for them to get mange or other diseases, and thus it’s best to stay away from them as much as possible.

Foxes can also be aggressive with food sources, so it’s important to never feed them or approach them too closely while they are eating.

Taking measures to secure garbage cans or pet food left out in the yard can help to deter foxes from coming around your property. I have a locking trash can outside as we get foxes and raccoons.

If a fox continues to display aggressive behaviors, calling animal control or a professional wildlife expert may be necessary. The best policy when dealing with wild animals I’ve learned over the year’s training dogs is that it’s best to avoid them as much as possible.

If you have a Sighthound as I do, or a hound that loves to put their nose to the ground, they may pull or get very excited at the sight of wildlife. If this is the case, redirect their attention as much as possible (though this can prove to be hard) and get out of the situation as quickly as you can.

I usually stay calm and slowly back away or walk the other way from the animal. It’s important that you remain calm or if you get nervous, that will transfer to your dog who will think they need to protect you, escalating the situation.

Tips for Keeping Your Dog Safe From Foxes

When walking near potential wildlife areas, always monitor your pup and stay alert for signs of wildlife nearby (i.e., tracks or scat). More than likely, they will pull to get where they want to go with all the fascinating smells!

Keep them leashed until any wildlife has dispersed. Stay calm if any contact occurs between them and the animal. This will help maintain composure on both sides!

Finally, check in with your vet regularly regarding vaccination updates. This will help protect them against any illnesses should contact occur between them and wild animals such as foxes. I always check my dogs’ records before going on hikes or trips just to make sure they’re up to date.

There are several steps you can take in order to ensure that both you and your furry friend stay safe when encountering wildlife like foxes:

Fox attacks are rare but not impossible. Taking some basic precautions can help protect both you and your pet from these potentially dangerous encounters.

By following these simple tips, you’ll be able to explore nature with your pup while keeping his safety a top priority! 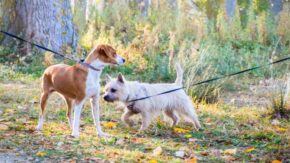 In selecting a leash for your dog, there are many factors to consider. Read this article, and you’ll know everything there is to know about the best leash for your pup. 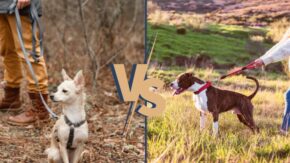 Wondering if a long leash or short leash is better for your dog? Check out this post for a breakdown of the pros and cons of each. 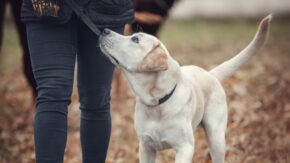 Want to make sure your walks are enjoyable for both you and your pup? Here’s how to teach them how to heel on a leash quickly & easily. 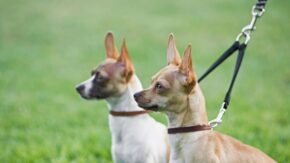 A great way to save time & energy if you have 2 dogs is to take them out on a walk simultaneously. To do this, you’ll need a high-quality dual dog leash.