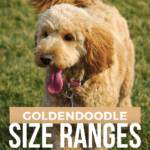 One challenge when you have a goldendoodle puppy is predicting how quickly they’re going to grow and how large they’ll be when fully grown. Let’s take a look at the factors that influence your puppy’s ultimate size and pass on some tips for guesstimating how big your standard, mini, or toy goldendoodle is going to get!

Goldendoodles are the adorable and good-natured offspring of golden retrievers and poodles, but as a hybrid or mixed breed, it can be hard to predict how quickly or large a goldendoodle puppy is going to grow unless you know their lineage and the size of their parents:

How Many Sizes Of Goldendoodle Are There?

There’s no agreement on how many sizes of goldendoodle there are in the world. Breeders and organizations like the Goldendoodle Association of North America (GANA) recognize anywhere from 3 to 5 size-classes depending on their weight at maturity (or when full-grown):

Sizes Of Golden Retrievers And Poodles

As you can see, there’s a huge variation in goldendoodle weights and heights, and that makes sense when you consider the breeds they’ve descended from. You can learn more about their history in our detailed Care Guide, but here’s the basic facts about the goldendoodle’s parent breeds:

So your doodle’s size isn’t just determined by their generation and how much poodle they’ve inherited, it also depends on which size(s) of poodles they’ve been bred from. That’s why there’s so much variation in the size, weights and growth rates of goldendoodles!

How Big Are Goldendoodle Puppies?

Puppies typically go home when they’re about 8 weeks of age, although some breeders prefer to keep them for a few extra weeks and send them home at 10 or 12 weeks old. 8-week old goldendoodle puppies range from 3 to 12 pounds in weight, depending on whether they’re from a toy, mini, medium or standard line!

How Quickly Do Goldendoodle Puppies Grow?

Goldendoodle puppies grow very quickly, and their most rapid phase and how long they grow just depends on their size. Smaller doodles usually have a slower rate of growth and reach their adult size earlier, while larger dogs may continue to pack on weight for more than a year.

By 8 weeks of age, most puppies have gained between 25 to 30% of their final adult weight. You can often make a reasonable estimate or “guesstimate” of a goldendoodle puppy’s adult weight by multiplying their weight at 8 weeks by 4.3.

The toy or petite goldendoodle stands about 14-inches tall and weighs less than 25 pounds when full-grown, which makes them easy to pick up and suitable for life in an RV or apartment.

Mini goldendoodles range from 14 to 17 inches tall and usually weigh between 26 and 35 pounds as adult dogs. This is an ideal size for families with older kids, apartment dwellers and folks who want a small but exciting companion!

Medium goldendoodles are the most popular size, and it’s not hard to see why. These teddy bears stand from 17 to 20 inches tall and weigh 36 to 50 pounds, making them the ideal-sized doodle for active families.

If you want a large goldendoodle that stands more than 20 inches tall and can weigh from 50 to more than 90 pounds, then you’ll be looking for a standard size puppy! These big dogs are ideal for any family with the room to accommodate their bounding and energetic playstyle.

What Influences Your Goldendoodle’s Adult Size?

Your puppy’s growth and eventual adult size are governed by a host of variables and influenced by both genetic and environmental factors, but they don’t all play an equal role. For instance, a puppy’s growth can be stunted through poor or inadequate nutrition, but the specific diet they’re fed doesn’t usually play a huge role in their final size. Proper nutrition just helps them reach their maximum potential.

The main factors that influence your puppy’s size are:

Male dogs may grow significantly bigger than females in some breeds, but for goldendoodles there doesn’t seem to be a strong correlation between their adult size and gender. But doodles that are surgically altered (spayed/neutered) prior to reaching sexual maturity may end up growing taller, so talk with your vet about the optimal timing for your dog’s surgery.

Conclusion: What Size Goldendoodle Should You Get?

If you’re worried about your doodle outgrowing your home, or if you live in an apartment with weight or size restrictions, you’re probably best off working with a breeder instead of adopting a puppy with an unknown lineage.

It’s difficult to predict how large a goldendoodle puppy will grow, although their weight at 8 weeks can help you make a rough guesstimate of their final adult weight. What size goldendoodle do you have, and how big was your puppy at 8 or 16 weeks? Share your puppy’s info in the comments below, or come join our pack on social media!

Jen Clifford is an animal behaviorist and veterinary technician with more than a decade of hands-on experience working in small animal and specialty veterinary clinics.

2 thoughts on “How Big Do Goldendoodles Get?” 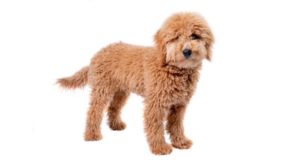 Selecting reputable Goldendoodle breeders in Arizona for your next puppy is a good place to start when looking for your new pet. 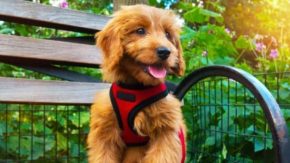 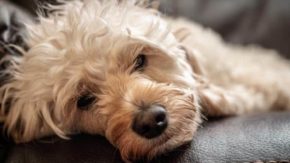 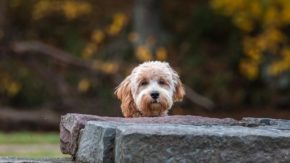 Mini Goldendoodle puppies are a favorite for many homes. When selected from a reputable breeder, these friendly dogs are the perfect addition to your family.