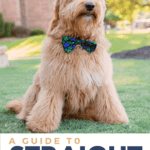 Most people associate the mini Goldendoodle breed with the iconic, curly teddy bear dog. However, there are several different types of Doodle, including the straight hair Goldendoodle. Straight hair or flat-coated Goldendoodles have the body shape of the Poodle parent but lack the eyebrow, beard, and eyebrows, known as “furnishings” around their face.

So, why do some Goldendoodles have a flat coat, and do they shed?

Read this guide to learn all about the straight hair Goldendoodle.

Why Do Some Goldendoodles Have A Flat Coat?

People are often surprised to discover that Goldendoodles can come with straight fur rather than the iconic curly, light-shedding coats that the breed is famous for.

So, why do some Goldendoodles have a flat coat?

The Goldendoodle is a cross between a Poodle and a Golden Retriever. Puppies produced from this designer crossbreed can take on characteristics from both parents, although no two puppies are identical. Even pups from the same litter can appear totally different, depending on which parent’s genes are dominant in each puppy.

So, some F1 Goldendoodles might develop the curly coat of the Poodle parent, whereas others could have a flat, straight coat like a Golden Retriever.

The coat type of every puppy will also be influenced by what generation of crossbreed it is.

Generally, F1B puppies are the most popular Goldendoodle variation, as they have the cute teddy bear looks that people love, and they have a very low-shedding coat.

As a Goldendoodle puppy matures, his coat often changes. For example, the color of the coat might fade and become lighter, or the hair can get straighter or curlier as the puppy grows.

That’s one of the appealing things about Goldendoodles; you never quite know what you’re going to end up with!

So, straight hair Goldendoodles rarely occur in F1B and F1 puppies. However, they are regularly found in F2, and F2B litters.

Most people looking for a Goldendoodle puppy want the typical Doodle curly-coated look, so for that reason, flat-coated Doodles are not seen as commonly. In fact, if you come across an adult Doodle with a flat coat, you probably wouldn’t even know that it was a Goldendoodle at all! That’s why these dogs are often considered to be rarer than they are in reality.

How Can You Tell What Type Of Coat Your Doodle Will Have?

The best way to work out what kind of coat your puppy will have at maturity is to take a look at the hair around his mouth.

Consider How Your Dog Was Bred

As previously mentioned, your dog’s coat type is dependent on genetics. So, let’s take a simplified look at that.

We’ll refer to the Retriever coat gene as the “N” gene. The “N” gene gives the dog a smooth face without a mustache or beard and a shedding, silky coat. However, Poodles have an “F” coat gene, where “F” stands for furnishings.

If you cross a Poodle with a Golden Retriever, you produce F1 Goldendoodle puppies. Every puppy will take one coat gene from either parent, giving the puppy a genetic coat code of F/N. So, all the puppies will have the characteristic Doodle furnishings. However, when it comes to F2 crossbreeds, coat type is a game of chance. Some puppies will take one “F” gene and one “N” gene, whereas some (around 25%) will take two “F” genes, producing a Poodle coat. Others will inherit two “N” genes, resulting in a puppy with a flat coat.

Some Goldendoodle breeders breed F1B Doodles, which is an F1 dog bred with a purebred Poodle to avoid that lottery.

Alternatively, some breeders have their F2 breeding dogs’ DNA tested for coat type, using only dogs that have inherited two copies of the “F” gene. On the other hand, some breeders are quite happy to produce flat-coated Goldendoodle puppies.

Downsides Of A Flat Coat Goldendoodle

There are a couple of downsides to getting a flat or straight coat Goldendoodle instead of a curly-haired type.

The main downside of a flat coat Goldendoodle is that these dogs tend to shed much more than their curly-coated counterparts.

As you would expect, flat coat Goldendoodles are typically less hypoallergenic than curly or wavy coats, simply because they shed more.

However, it’s not the actual hair that causes an allergic reaction in people who are sensitive to animal fur. The allergy is caused by the dander, a combination of shed skin cells and saliva. Dogs that shed a lot of hair also tend to drop more dander than those that don’t shed as much.

Why Should You Get A Straight Coat Goldendoodle?

Most people want a Teddy Bear Goldendoodle for their looks. However, if you don’t want your dog to look like a Poodle, you might prefer a straight coat Doodle. Basically, that’s down to personal preference.

Also, if you have a curly coat Goldendoodle, your dog’s coat can be prone to matting. Most people have their Doodles clipped every few weeks to keep the coat short and mat-free, which adds to the expense of keeping the dog. However, since straight-coated dogs shed more, you’ll still need to brush your Goldendoodle every day or so to keep the coat in good condition and get rid of loose hair that would otherwise finish up on your floors and furniture.

Many breeders have their stud dogs genetically tested to determine whether the dogs will produce straight, wavy, or curly-coated puppies.

The Cu locus gene, also known as the KRT71 gene, decides what coat type the puppies will have. Usually, the less Cu locus the puppy has, the straighter its coat will be. As Goldendoodles are usually created from many generations of Standard Poodles and Golden Retrievers, it’s likely that their coats will have a recessive Cu locus gene or be wavy.

If you want to know what kind of coat your puppy will have, you can ask your veterinarian to perform a reliable DNA test.

How Maintenance And Grooming Differs

As you might expect, there is a difference in the grooming and maintenance requirements of curly and straight coat Goldendoodles.

The wavy or shaggy coat is the most commonly seen kind of Goldendoodle coat. The coat has a shaggy appearance or falls in soft waves and takes the least maintenance of the three coat types.

To keep the coat tangle-free and in good health, you need to brush your dog regularly to get rid of mats and loose hair. However, Goldendoodles with a wavy coat are usually low to non-shedding.

If your puppy takes mostly after the Poodle parent, he’s likely to have a tight, curly coat. That’s not to say that these are short-haired dogs! The tightness and length of the curls vary, depending on the puppy’s parents. So, you can have long, loose barrel ringlets or tight, kinky Poodle curls.

Goldendoodles with a curly coat need regular grooming to prevent the hair from matting. That’s why many Doodle owners prefer to have their pets shaved close to create a maintenance-free style.

Curly coat Doodles are usually F1B, and the coat type is the second most commonly seen. These dogs are very popular with people who have pet allergies since the coat barely sheds at all.

The straight-coated Goldendoodle is often mistaken for a Golden Retriever. You generally see the flat or straight coat in F2B and F2 generation Goldendoodles and very rarely in F1B and F1 dogs.

Straight-coated dogs don’t have the furnishings of their curly-coated cousins, but they do tend to shed quite a lot more. The straight coat is straightforward to maintain and doesn’t tend to mat, making this coat type very popular with owners who don’t want to spend a lot of time grooming their dog.

You’ll need to brush your dog with a slicker or pin brush a few times each week and wipe him over with a grooming mitt to keep the coat looking good. Unlike curly-coated dogs, brambles and leaves are much less likely to get tangled in the dog’s coat. Also, these dogs don’t have hairy feet that need inspecting and combing every day. Never have a straight coat Goldendoodle shaved or clipped.

Flat coat Goldendoodles need a bath only when they begin to develop that unpleasant doggy odor that most pups get after a while. That said, if your pup decides to roll in something unspeakably nasty, a bath will be in order!

Yes, there is more chance that an allergy sufferer will be affected by a flat coat Goldendoodle.

As I said earlier, it’s not the dog’s coat that causes the allergies but the dander that the dog sheds. Dogs that shed more hair tend to drop more dander than those that don’t shed since the dander gets stuck to the hair and falls off the dog with it. The dander then floats up into the air or settles on your carpets. Whenever someone walks across the carpet, the dander flies up into the air, where it’s inhaled by the allergy sufferer, setting off an allergic reaction.

So, as flat coat dogs shed more than curly coats, there’s likely to be more dander around in your home, triggering allergies more easily.

If you have a pet allergy, it’s a good idea to visit the breeder and spend time around the dogs to get an idea of how you are likely to cope with one living in your home.

Did you enjoy our guide to straight hair Goldendoodles? If you did, please remember to share!

Straight coat Goldendoodles lack the teddy bear looks that make the breed so popular. However, when it comes to temperament and build, flat coat Doodles are just the same as their wavy coat cousins. Although straight-coated Goldendoodles tend to shed more than curly-coated types, they don’t need shaving, and their grooming requirements are less too.

On the downside, if you’re an allergy sufferer, you would be better off with a curly coat Goldendoodle since they shed less.

Do you have a Goldendoodle? What coat type does your furry friend have? Tell us in the comments box below.

9 thoughts on “A Guide To Straight Hair Goldendoodles” 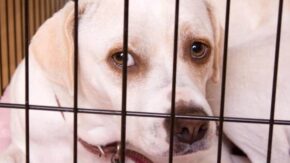 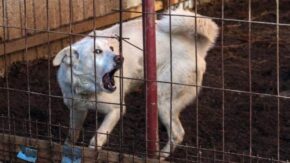 Dogs are social animals and need companionship. When they are crated for long periods of time, they can develop caged dog syndrome (CDS). This condition is characterized by several different behaviors. Here we discuss signs, treatment, and prevention of CDS. 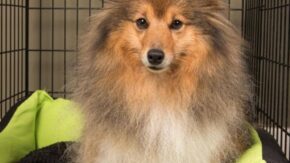 A bed in your dog’s crate is necessary for their comfort. This article discusses how to make the crate cozy and inviting. 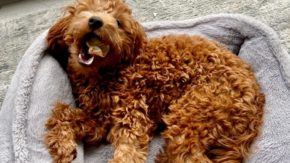 A Goldendoodle has a gorgeous double coat that can be prone to tangling. Read this helpful guide to learn how to detangle Goldendoodle fur and prevent matting.